With Eggplant DAI, you create models of your systems under test (SUTs) so that Eggplant DAI can use its algorithms to generate tests on your system. Models are composed of states and actions. States are things such as individual screens in an interface. Actions are things that users do in a given screen, or that move users between screens.

When you run a model, the Eggplant DAI engine chooses the path to follow, determining each action based on its algorithm and what steps are possible. To run tests against your SUTs, you link SenseTalk snippets from the Fusion Engine to your actions.

There are three types of actions in Eggplant DAI:

Linking an Action Back to the Same State

The Previous action type is the only type whose action is predefined specifically to cause a state change. The other action types perform whatever actions are defined in the attached SenseTalk snippets. Therefore, if you want an action to call a new state, the snippet code must explicitly make that happen.

In other words, no action is required (or available) to link an action back to its parent state. All actions remain within their state unless a new state is specifically requested by the attached snippet.

Follow these steps to add an action to a state within your model:

Note: Actions are shown in the Model tree tab in the left pane. Actions that are within a state appear in the hierarchy underneath that state, and global actions (described below) appear at the same level in the tree as states. You can move actions between parent states by dragging and dropping them on the tree view.

Global actions are actions that can execute in any state. A good example of a global action is screen rotation: A user can rotate a mobile device at any time while using your application, so you don't want to limit its execution to any one state.

To add a global action to your model, follow the instructions shown in Creating Actions. However, instead of selecting a state (step 1), make sure that no state or action is selected. When you create an action with nothing selected, the action is a global action.

After creating a new action, you can configure the action properties to customize its behavior. Edit these properties in the Action Properties tab, located in the right pane of the Modeler UI. 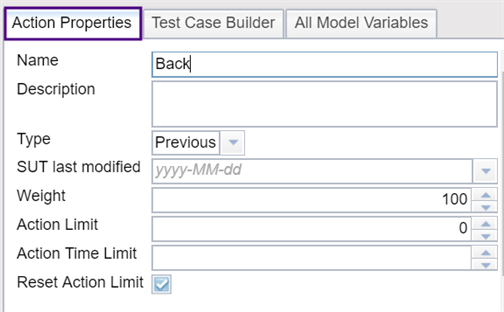 In the top section of the Action Properties tab, you can adjust the general properties of a action:

Use this section to configure an action to connect to a state. The left side of this table is for Connection Selection, and it includes three columns:

The Condition for Connection section on right side of the table is where you can set conditions that must be met before an action can connect to a state. This section includes three columns:

This section lists any snippets that you have linked to the selected action. A snippet is a specific piece of SenseTalk code that executes when this action is encountered during a test run.

The Snippets called by action section of the Action Properties tab

You can add snippets to states or actions by using the Model and Snippets tabs. For information about linking snippets this way, see Linking Models to Snippets.

If you know the name of a snippet you want to attach to an action, you can add it here. Click in the Name field, then enter the snippet name. 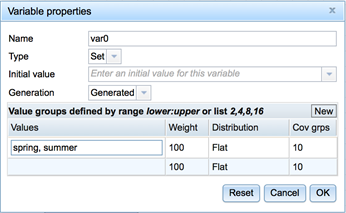 Tags identify specific properties about a model. You can create and apply these tags to actions to track those properties within that model.

The Associated Tags section of the Action Properties tab

Use the settings in this section to associate tags with the actions in your model. See Using Tags in Eggplant DAI for information about creating tags, then applying the tags you create to an action within a model.

Preconditions for This Action to Execute Section

You might want a model execution to call an action only after a specific condition has been met. For example, a button might be disabled until data is entered in a field. To model this case, you would create actions that are enabled based on variable values.

Use this section to set evaluation criteria for preconditions. The Preconditions section lists each defined state variable for the parent state of the selected action, along with any global variables.

For more information about preconditions, see Setting Preconditions for Actions.

Checks to Perform in Action Section

Use this section to test the value of a variable, and to display a message based on the outcome of that test when the action executes.

First select an action. Then you can set up the checks:

It's possible to build more complex tests using variables. For example, you might add variables to an action that capture responses from your SenseTalk snippets, then use these responses to create additional variables and pass them to other snippets or actions.

To see action time results in reports, enable that capability in the Settings tab. 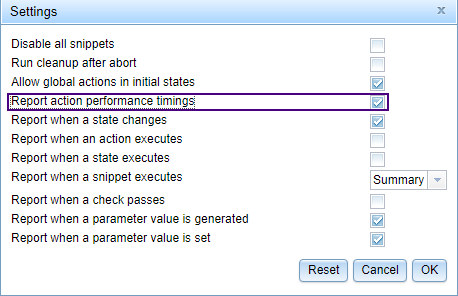 Action timing results display in the console as the test runs:

The log shown above displays an error because an action took more time to execute than the set action time limit.