The compare screen feature in Eggplant Functional detects changes to the layout or appearance of a screen or window in your application. This feature can alert you to changes that might affect the usability of the application or its compliance with your company's visual guidelines.

Compare screen can also alert you about new or missing elements, which can indicate a need to add, change, or remove some of your functional tests. Compare screen does not test the functionality of your application or interact with it in any way.

Eggplant Functional’s UI verification feature is based on the SenseTalk CompareScreen command, which compares the current SUT screen against a baseline image. Typically, you would use this command at a point in your script just after an action has caused a transition to a new screen or window of your application under test—in other words, as soon as you display a new screen that you want to verify for layout variation.

If the comparison shows that there are differences between the original image and the current state of the screen, you can decide whether those changes are significant and should be followed up on, or if they are expected or acceptable changes that should be ignored in future comparisons. The comparison looks for:

The comparison takes advantage of OCR, so it reports differences in each of these categories for text changes as well as change to images.

The CompareScreen command can be used in your SenseTalk scripts wherever you want to do a UI comparison. The command takes an image name as a required parameter, which is the baseline image for the comparison.

By default, CompareScreen captures the entire SUT screen. However, for desktop applications, you typically want to compare only the contents of a single window instead of the entire screen. Therefore, you can pass an optional rectangle parameter so that you capture only a part of the screen, such as a specific application window. You use the rectangle (or rect) parameter name and can define the rectangle either with coordinates or with images specifying two opposite corners:

See The Set Rectangle and Generate Code Dialog Box for information about defining rectangles in SenseTalk.

Tip: As a best practice, we recommend that you specify a rectangle to focus your comparison on the application window or area of the screen of interest. You can perform full-screen comparisons when that is appropriate. However, you will see the best performance by constraining the comparison to only what matters to your testing.

When CompareScreen is executed, the script locates the baseline image in the special [Baseline_Screens] folder within the Images folder of the suite (or in an active helper suite). If no image by that name is found, an initial baseline image is captured and stored automatically, then the script proceeds without any further action.

Note: The [Baseline_Screens] folder is created automatically the first time you run CompareScreen in a suite. You do not need to create this folder yourself.

The behavior following the comparison is controlled by the Compare Screen Action mode, described below. Typically, when differences are detected, you can allow the Compare Screen panel to open so that you can review the changes and determine whether to take further action.

You can also change this setting by using the pop-up menu on the Run window. However, you need to customize the toolbar to add that option. Right-click the Run window toolbar, then select Customize Toolbar. Drag and drop the Compare Screen option to where you want it to appear on the toolbar, then click Done.

A detailed analysis of the differences between the two images is performed to identify regions or elements that have changed, then boxes are drawn around areas of the screen where differences are detected. You can use the arrow buttons at the bottom left to scroll through each detected difference and determine whether the change is significant to your testing. 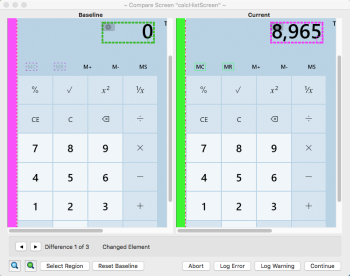 When the Compare Screen panel opens, the first detected difference is selected on both the baseline image (left) and current SUT screen (right). The message beside the scroll arrows beneath the images tells you what type of difference was detected for the selected region.

Rectangles are drawn around regions as follows:

Note: If the baseline image and the current screen are very different, the comparison feature draws rectangles around the entire screen or a large portion of it, on both the baseline and current screen, and reports a change type of Screen Changed. This status can be a result of large color shifts, a screen size change, or similar large layout variation. You can still review individual changes, but you might need to capture a new baseline image after you determine the cause of the change.

Use the arrow buttons to cycle through the detected differences and review each one to determine the appropriate action. Each time you click the forward or back arrow, the selected rectangles in the images above change to the new region, and the message updates to show the change type.

You can change the magnification of the image by using the Zoom In and Zoom Out buttons at the bottom left of the panel. When the screen images are zoomed in to high levels of magnification, the individual pixels that are different are also highlighted.

When you need to take action on a region, click the gear icon at the top-left corner of its rectangle. Your options for each region are: 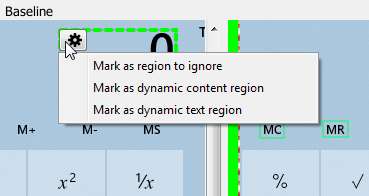 You can remove any previously defined region by selecting it, then choosing Remove this region from the gear menu.

Adding Your Own Regions

In addition to the differences detected by the comparison, you might want to add your own regions to ignore or treat as dynamic. To create your own region:

When you create a new baseline image with this method, any ignored or dynamic regions stay in place. Therefore, if those regions no longer apply to your new layout, you need to edit or remove them from the new baseline image.

After you review the comparison, you can continue with the script run, whether you took action or not. Use the buttons at the bottom right of the Compare Screen panel to determine how to proceed:

Important: Any changes you make on the Compare Screen panel persist, including adding or removing regions or creating a new baseline image, regardless of how you choose to proceed with the script run.

Reviewing Differences After a Script Run

You can open the Compare Screen panel after a script run by going to the Results pane and selecting the results for the specific script. Note that this option is available only if you logged an error or warning for the comparison.

Select the results for the script run that have an error or warning logged. On the Action menu above the detailed log, select Show Screen Differences.

The first CompareScreen log entry is located and the Compare Screen panel opens showing the differences between the baseline image and the appearance of the screen at that point in the script run (based on an image captured during the script run). Note that it does not look at the current SUT screen, and therefore does not require an active connection to the SUT.

When you review differences after a script run, you can perform the same actions that are available during script runs. You can:

When you are done examining the screen differences, click Done to dismiss the panel.

Running CompareScreen from the Command Line

If you use CompareScreen through Eggdrive, the best way to get useful results is to call CompareScreen as a function and return the list of differences. That is, use an Execute message to execute a command such as