Test automation with iOS devices offers some unique challenges. Following are tips and instructions to help you configure iOS devices and your computer for testing, and to avoid issues in that testing.

Much of your automation control of iOS devices with Eggplant Functional is done the same as for any other type of system under test (SUT). However, some control options are unique to mobile environments and to iOS specifically.

To learn how to automate your mobile device from Eggplant Functional scripts, see the following resources:

High CPU usage during automation of iOS devices is expected, as the processing for that automation happens on the computer running iOS Gateway, not on the iOS device.

The quickest way to reduce CPU usage is to stop automation when you're finished testing.

To reduce CPU usage during testing:

When you work with an iOS app, it is useful to know the state of that app. For our purposes, we work with three iOS app states: Frontmost, Suspended, and Terminated. 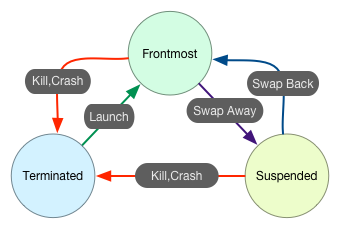 Frontmost: The Frontmost app is the app you are currently looking at. If you are multitasking in iOS 9 or later, only the left-side app is Frontmost. The right-side app is considered Suspended.

Suspended: An app that has been Frontmost since it was last Terminated (or since the last device reboot), but that is not currently Terminated.

Terminated: A terminated app is an app that is completely unloaded from memory. This happens in the following circumstances:

You can use the KillApp command in Eggplant Functional. For more about this command, see the KillApp Command.

Note: You should be able to kill any developer-signed app in any iOS version.

On iOS 9 and later devices, you can access the recently used apps list by double-pressing the home button. In Eggplant Functional, you can use the TypeText command to automate the action in your SUT by using the following code:

Important: This command must be entered as one line. If you use two separate lines, the device registers two separate home button presses, not a double-press.

Disabling iOS Features that Can Interfere with Testing

In order to successfully test iOS devices in Eggplant Functional, it is necessary to properly configure those devices. Certain features in iOS need to be disabled to prevent test interruptions. Listed below are instructions for disabling iOS features that can interfere with testing.

Note that iOS Gateway automation can't begin if there are any pop-up notifications displayed on the iOS device.

In iOS 9 and later, icons in the user interface move as the device is physically moved. This motion can cause problems with matching images in tests. Icon motion effects can be disabled in Settings. Go to General, then Accessibility, then set Reduce Motion to On.

If you are entering text on an iOS device, auto-correct suggestions are typically accepted by default, which can cause text to appear incorrectly. You can work around this problem by disabling automatic keyboard options on your test devices.

In the iOS Settings app, select General, then Keyboard. Turn off the settings for Auto-Capitalization, Auto-Correction, and Predictive, and any other setting that adversely affects the display of your text.

When you transfer files using iOS Gateway, the files are not transferred to the actual iOS device, but instead to and from the machine that is running iOS Gateway.

Eggplant recommends swapping between apps using the LaunchApp command in Eggplant Functional instead of pressing the home button and navigating the home screen. There are several reasons for this: