To implement encrypted communication between Eggplant Functional and a system under test (SUT), we recommend using stunnel from www.stunnel.org. Stunnel creates a Secure Socket Layer (SSL) encryption wrapper for the VNC connections that is transparent to both the client and server.

Stunnel has binary installers or stand alone executables for Windows and has a text configuration file. For Linux, Unix, or Mac platforms, you can build from source although you may prefer to use SSH tunneling (see Tunneling Using SSH, below).

Stunnel is free software released under the GNU GPL2 so there are no commercial restrictions for usage although there can be restrictions on the security algorithms for certain regions. See the stunnel license page for details. 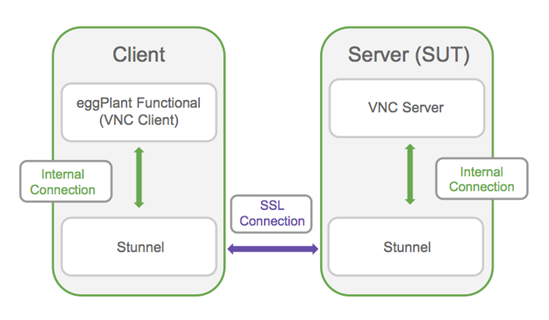 The client stunnel can be configured so the client can connect to multiple servers.

Step by Step: Setting up Stunnel

The above configuration uses all the default settings for stunnel. There are numerous options for security and using your own certificates etc. See the stunnel documentation and various articles on the web.

An alternate method for secure connection tunneling is to use SSH. This uses the same connection architecture as above but using SSH client and servers instead of stunnel.

SSH may be a more suitable approach when using MAC, Linux or Unix that normally includes an SSH client and server as standard.

On Windows, putty is a commonly used open source SSH client but the availability of SSH servers on Windows is more limited, particularly non-commercial options; hence stunnel being recommended for Windows.

An internet search for SSH tunneling will return numerous articles and guides.