Working with Agents in Eggplant Manager 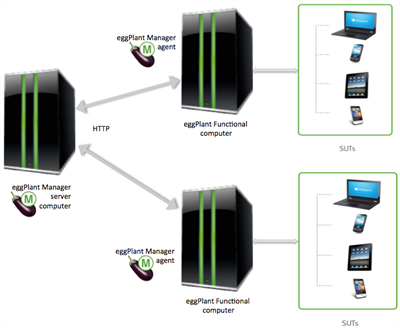 To set up an agent install it on the computer you want, then make it available to run tests by navigating to Admin > Agents on Eggplant Manager and creating a new agent.

Note: Only users with the Administrator role can see and access the Admin menu.

After you create the agent, authorized users can specify that agent when they create a test schedule, or choose to run a test on demand. For on-demand test runs, the agent setting is in the Advanced options for Run Now. See the step-by-step instructions for Creating a Schedule and Running Tests on Demand for more information.

You must install an agent on each computer running an Eggplant Functional instance that you want Eggplant Manager to use for testing.

Note: The Eggplant Manager Setup program installs and runs an agent on the same computer with the Eggplant Manager server. If Eggplant Functional is also installed and licensed on this machine, you can use this configuration to run your tests.

Step by Step: Installing an Agent

To install an agent on a computer where your Eggplant Manager server is not running, follow these steps:

Step by Step: Creating an Agent in Eggplant Manager

After you install an agent, you need to make it available to Eggplant Manager to run tests. The following steps guide you through creating an agent within Eggplant Manager: 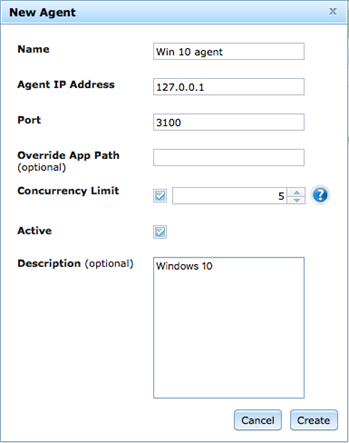 Starting and Stopping an Agent

There are different methods to use to start and stop an agent on each operating system supported by Eggplant Manager.

Run the start.command or stop.command script to start or stop an agent. The scripts are installed in the following directory by default:

To stop an agent, use the stop.bat script, which is installed in the following directory by default:

Run the start.sh or stop.sh script to start or stop an agent. The scripts are installed in the following directory by default:

Specifying an Agent for a Test Script

In Eggplant Manager, you can create tests, and then add scripts to those tests. You specify the agent at the script level, so you can choose a different agent for each script in a test. This means that a single test can work with more than one agent.

To learn more about this process, see Creating Tests and Adding Executables.

To find out if a script is actively running against an agent, do the following:

From the Agents page click the Status button for an agent to check its status. After you click an agent's Status button, that agent reports one of the following status values:

Note: To check the status of an agent from a computer where Eggplant Manager is not installed, enter X.X.X.X:3100/running in the address bar of your web browser, replacing x.x.x.x with the IP address of the agent machine.

Specifying Ports for an Agent

In some configurations, you need to use a different port for an Eggplant Manager agent. To change this, you'll need to edit the configuration file on the agent machine.