The Runtime Settings tab of the Group Specifications dialog box in the Test view for a script in Eggplant Performance Studio provides several tabs that let you configure options for how your test or virtual users (VUs) start and run. Note that runtime settings can be edited for multiple groups at the same time. For information about displaying this dialog box, see Configuring Virtual Users. 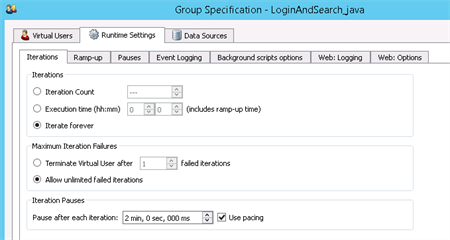 The Iterations section of the Iterations tab controls how long a test continues. Select between these three choices and input your desired values:

The Iteration Pauses section lets you create a pause between iterations. Input the desired time value in the box (min/sec/ms).

The Runtime Settings Ramp-up lets you determine intervals between VU start times as a test begins: 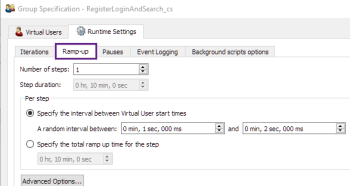 If you click Advanced Options, the following dialog box appears: 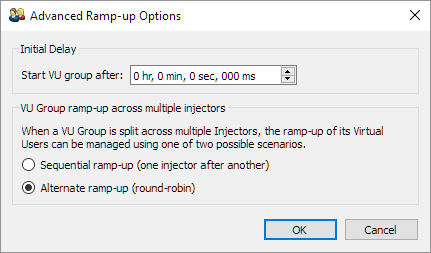 This dialog box lets you set some advanced ramp-up options:

Initial delay: Determines the start delay from the beginning of the test for this particular VU Group.

At the bottom of this tab, you'll find a graph that displays how your ramp-up options should perform. As you make changes, the graph updates dynamically to reflect the new choices. 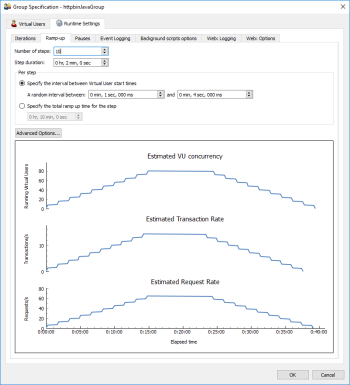 Script pauses can be adjusted on the Pauses tab of Runtime Settings. The pause() function is used by Eggplant Performance in scripts to halt its execution temporarily. The function can be passed a time value (in milliseconds) or left blank. Pauses are often referred to as user think-time.

Replace with random values between: Assigning min and max values here will create a random pause between the selected interval for each non-parameterized script pause within the VU Group.

Use actual values in script: Use the hard-coded time values of the pause() statements in the script.

Replace with random values between: Replaces the hard-coded time values with a random value between min and max.

Apply adjustments (+ -) with random values between: Calculates a random value between min and max. This value is then randomly added to or subtracted from the hard-coded time value in the pause() statement.

Multiply the script pauses by the indicated percentage to decrease or increase pause values. This factor is applied to the pause() statement after all other calculations regarding pauses have taken place. 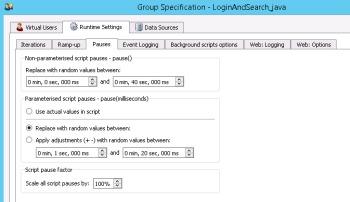 Disabling event logging stops timings from being created, as these timings are collected from the event logs after a test finishes. This option is useful when running a test intended as background load where timings might not be relevant.

The Background scripts options tab contains a timeout option. This option enables you to specify how long to wait before a background script is forcibly stopped if it is still running at the end of the script, iteration, or workflow.

Some VU types may possess additional type-specific runtime settings. These types appear as extra tabs. For information on runtime settings specific to a VU type, see the relevant VU chapter within this user guide.