Getting Started with Eggplant Performance for JMeter

This guide covers the following topics:

To use Eggplant Performance for JMeter, you need a JMeter test plan. You can use your own test plan or download the sample test plan used in this guide.

Note: The nopCommerce test plan consists of 50 virtual users (VUs) repeatedly browsing to http://nopcommerce.testplant.com, logging in, then logging back out. The intial ramp-up is set to 2 minutes, and the workflow is repeated for 50 iterations per VU.

Select Create New, then use the Create a workspace dialog box to give the workspace a name and browse to a directory:

A folder for the workspace is created in the directory you specify.

Your newly created workspace is opened in Studio, revealing a collection of six folders. You can think of these as somewhat similar to JMeter's test elements, in that each folder offers some functionality that you'll likely want to use at some point.

The folder of interest is of course the JMeter Test Plans folder. Before you can make use of it, you need to create a project.

A dialog box appears to indicate that the test plan .jmx file has been copied into the workspace.

Note: Eggplant Performance will not modify the original .jmx file. If you want to update the test plan without repeating the import process, you can open and edit the .jmx file that was copied into the workspace.

Next, you need to create a test for the test plan. The test is a key component of Eggplant Performance The test definition is what Test Controller needs in order to execute anything.

The main purpose of the test in the context of JMeter is to let you distribute the load generation across one or more injectors. It also lets you define KPIs and enable server monitoring.

To create a test, right-click the test plan node, then select Create test. 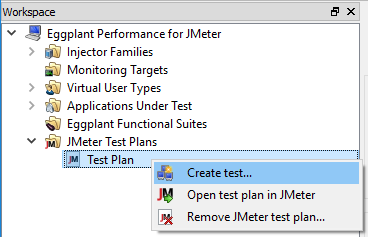 The new test appears in the project under the Tests node. Selecting it reveals details about the test in the center pane of the UI:

Opening the test in Test Controller does not launch the test, however. To start the test, click the green Start test button

on the toolbar to open the Start test run dialog box: 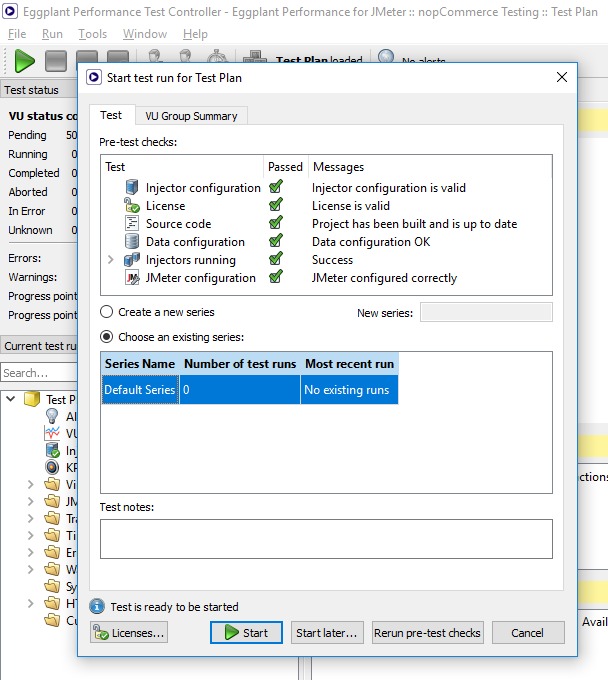 On this dialog box, you see that Test Controller performs several pre-test checks to ensure that all the required assets and configurations are in place for the defined test. If everything is ready, you can click Start at the bottom of the dialog box to start the test.

Assuming the test started successfully, Test Controller soon updates its runtime dashboards with information being collected by the VUs. The default view typically consists of the following tables and charts:

There are, however, many additional interesting charts to display, available in the tree view on the left-hand side of the UI. For more information about the available charts and reports, see Real-Time Test Monitoring in Test Controller.

Test Controller displays charts and tables of data. However, Analyzer is the Eggplant Performance component that is best suited for digging deep into collected test results. Analyzer is installed separately by default, so make sure you download and install it before proceeding.

After you install Analyzer, you can launch it either from its desktop shortcut or by using the toolbar button in Studio:

After you launch Analyzer, click the Analyze a test run button in the center pane to open the Test Run Browser dialog box. You'll be presented with your workspace, including any completed test runs: 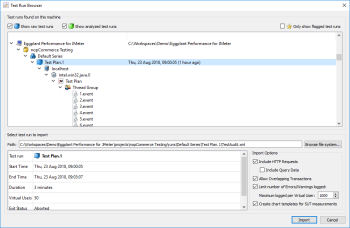 Select the test run you want to analyze, then click Import.

After the import process completes, you should see several folders appear in the left-hand pane with your test run at the top. When you select the test run, the right-hand pane displays several tabs with detailed information about the test that was executed, such as when it was started and stopped, the VU Group composition, which injectors were used, errors and warnings encountered, and so forth.

The last step involves creating an analysis view, which is a collection of charts and tabular data that are generated based on a specific analysis template. To create an analysis view, right-click the test run in the left-hand tree view, then select New analysis view to launch the Create an Analysis View wizard.

The analysis view lets you focus your analysis on a particular period of time within the test. For example, you might be interested in only response time statistics when the test was at "steady state," which would exclude the ramp-up and ramp-down periods. To change the focus period, which is called the time slice, drag the vertical sliders to the desired position. 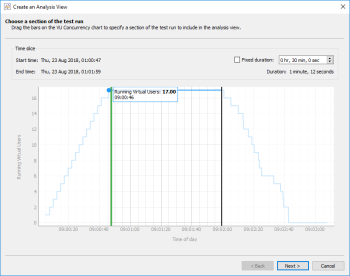 Click Next, then the wizard presents a screen where you select which analysis view template to use. There are two built-in templates: Default and Default Web. Select the Default Web template to generate HTTP request-level information in addition to what is generated by the Default template.

Click Next and the wizard switches to the Apply Grouping screen. This page is most useful for grouping error messages together that would otherwise be logged separately, such as when the error messages contain dynamic values. For more information, see Using Grouping in Eggplant Performance Analyzer.

You've now generated charts and tabular data from your JMeter test. You can explore the different charts by selecting them in the tree. It is often useful to view two or more charts at the same time on the same X-axis. To do so, hold down CTRL and select multiple nodes as depicted in the following screenshot: 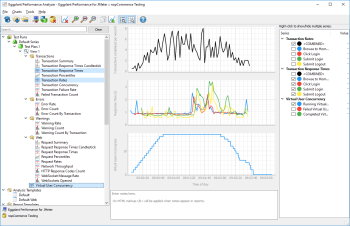 Now that you're familiar with the end-to-end process of importing a JMeter test plan, running a test, and analyzing its results, you might want to explore the other functionality available in Eggplant Performance. Here are some useful links to get you started: