You can set preconditions on model actions in Eggplant DAI so that the action can't be called during a model run unless specific conditions are met. For instance, you might have a button in your UI that becomes active only if you enter text in a field first. In this case, you could use a precondition on the button action to ensure the model couldn't call it unless the field text was entered first. Another use case might be if you have a global action that shouldn't be called from a certain state. 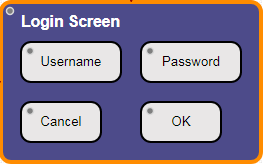 An Eggplant DAI model state for a login screen