Setting up a test lab can make both automated and manual testing go more smoothly. The physical setup of a test lab is important to the lab's function in the testing process. This document is a guide to setting up the computers, cables, and other parts that you need to create a test lab for use with Eggplant Automation Cloud.

What Is a Test Lab?

A test lab (or device lab) is a central set of test devices and environments that can be easily accessed by testers. A test lab has many benefits:

Eggplant Automation Cloud is a software product that lets you quickly set up a centralized test lab of real devices that your automation and manual testers can connect to. Eggplant Automation Cloud is a private device cloud solution, inside your firewall and under your control, and can include any mobile, desktop, or server test devices that you need – from iOS and Android mobile devices, to Windows laptops running Chrome or Firefox, to Linux database servers.

It is important to understand the logical architecture and operation of an Eggplant Automation Cloud test lab before planning the physical setup. The architecture is shown in the diagram below.

The key steps to set up an Eggplant Automation Cloud test lab are:

The key hardware questions when setting up the Eggplant Automation Cloud test lab are:

The following sections answer these questions.

The answer to "Which devices?" can change rapidly. It depends somewhat on your geography and sector (especially the priority of different devices), but typically teams need a mix of Apple and Android devices, with a variety of hardware models, OS versions, and browser versions. Several websites exist which can give you information about the current market share of different device configurations, and therefore which configurations you need to include in your test lab to get appropriate coverage. For example:

Android devices (and most other devices) can be tethered to a PC (Windows or Linux) or Mac. Apple devices, however, can only be reliably tethered to a Mac. Since every test team needs to be able to test both Android and Apple devices, and teams want to use the same type of machine for all gateways, gateway machines must be Macs. There are two options—a Mac mini or a Mac Pro.

Note: An eggBox is a Mac mini.

A Mac Pro can typically have up to 18 test devices tethered to it. Again, powered USB-2+ hubs are used to increase the ‘fan in’ of the Mac Pro, and these USB-2 hubs are connected to the Thunderbolt ports on the Mac Pro via a Thunderbolt-to-USB adapter. Note that a Mac Pro has 3 separate USB buses. The 18 devices should be spread evenly across these buses (i.e. 6 per USB bus).

Note that we have made some usage assumptions when measuring these figures. Certain kinds of tests use more of the USB bandwidth (e.g., for video streaming), and so if these tests are commonly running on several devices then fewer devices might have to be connected to the gateway; similarly some tests use less of the USB bandwidth (e.g. slow forms) and so in such cases more devices might be able to be connected to the gateway.

Physical storage is a key consideration. There are several options depending on the size of your lab and your requirements.

Magnets can be used to attach test devices to a wall or board. 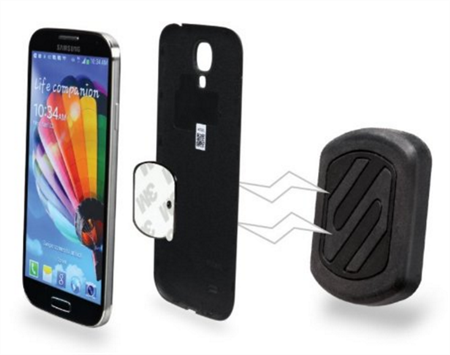 They key advantage of this approach is that all the devices can be easily be watched while tests are executing, and it is tidy, which is why it is TestPlant’s recommended approach for small test labs. The downside of the approach is that it does not scale well to test labs with 20+ devices (and a usable wall must be available).

The picture below shows a typical small test lab with 9 mobile devices (and two watches) connected to 4 eggBoxes.

A device rack is a more scalable approach that can be used for test labs with 10s and 100s of test devices. Typically the gateway machines would also be placed inside the device rack.

Note that the built-in USB hubs of such racks are typically relatively slow, so it is better to connect the test devices to the gateway machines using the approaches described in Section 3.2.

The picture below shows an example device rack from Tripp-Lite. 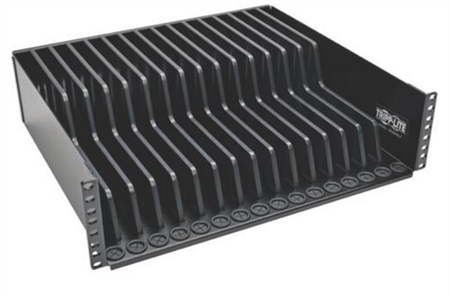 There are also products to enable device storage within your existing racks; e.g., the 3U shelf below.

An eggCrate (shown below) is a purpose-built device rack for 10 devices. It can be used for small test labs when magnets are not appropriate. 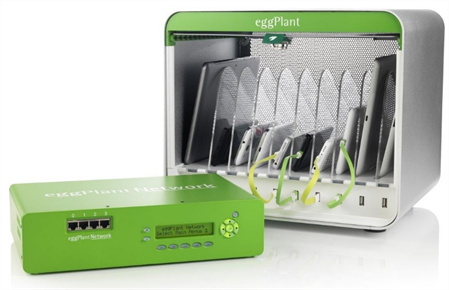 The following examples show the physical setup of two test labs. The size and configuration of each lab reflects the needs of the organizations that built the labs.

The picture below shows Eggplant’s own demo lab. All of Eggplant’s customer demonstrations and technical support investigations are done using this lab. Specific details:

The test lab setup at Testplant 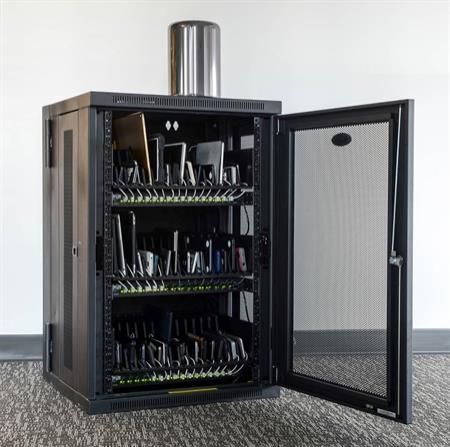