Eggdrive is a mechanism for external processes, such as a script from another testing tool, to use Eggplant Functional’s automation capabilities. 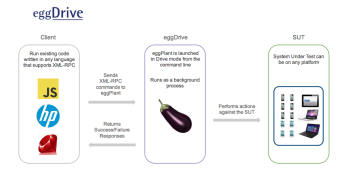 The best use of Eggdrive is incorporating Eggplant Functional into tests that have been written with a different testing tool. Examples include:

There are some situations in which Running from the Command Line might be a better approach than using Eggdrive. For more information on what approach might be best for you, see Eggdrive vs. Command Line Execution.

What Do You Need to Use Eggdrive?