The iOS Gateway interface has three main panels. The left panel is context-sensitive and lists devices and simulators that are available to test. The center panel of the iOS Gateway GUI comprises four tabs: General, Screen, Console, and Diagnostics. The right panel shows a list of apps that are loaded onto the iOS device or simulator that is selected in the left panel. 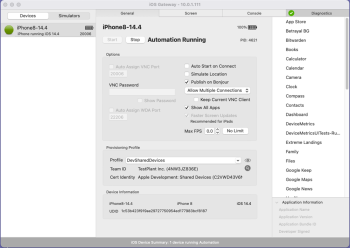 Settings in the General section of the window are specific to the iOS device you have selected from the Devices panel.

Start: Click to connect the VNC server and start automation.

Stop: Click to disconnect the VNC server and stop automation.

Connection Status: The status of the iOS device selected in the list in the Devices panel.

PID: The ID number of the process that's automating the selected device. You can reference the PID to force-quit a process from either the command line or the Activity Monitor app on your Mac.

The Process Identifier also displays in a tooltip when you hover over the device status in the Devices panel, as shown below:

Battery: The battery charge level of the connected iOS device.

Auto-assign VNC Port: Selected by default. iOS Gateway assigns a port for VNC connection to the device or simulator.

Port: When Auto-assign Port is disabled, you can specify a port for the iOS Gateway connection.

Auto Assign WDA Port: Selected by default. Automatically assigns a port for WebDriver connections. When this checkbox is cleared, enter the port you want to use in the text field below the checkbox. The default WDA port is 8100. WebDriver automation begins as soon as the iOS device is connected.

Note: In iOS Gateway 5.3 and later, port, VNC, and WebDriver options are disabled when automation is running. If you need to change any of these settings, stop automation, make any desired changes, then restart automation.
Note: Manual port selection is not available for WebDriver connections on simulators.

Auto Start on Connect: Not selected by default. Automation begins as soon as the iOS device is connected.

Simulate Location: Not selected by default. Allows users to override the GPS on an iOS device. Requires changes to System Preferences.

Allow Multiple Connections, Client Preference, Allow Only One Connection: Use the drop-down menu to determine whether multiple incoming connections are allowed on the same port.

Show All Apps: Selected by default. When this setting is enabled, the sidebar in iOS Gateway displays all the apps installed on the device. If you don't enable this setting, only your own development signed and installed apps display in the sidebar.

Faster Screen Updates (Recommended for iPads): When selected, automation shown in the Viewer window can appear smoother. Eggplant Functional scripts might run find images more quickly, as well. Note that after you select this checkbox, you might need to capture new screenshots. This feature works with iOS 11 and later.

Important: You should select Faster Screen Updates before you create your scripts. If you select this option after creating scripts, you might need to recapture your images. This option changes the scaling of any images in the script, so your tests might fail.
Important: You must have Faster Screen Updates enabled in order to accurately click WebElements when doing WebDriver testing on iOS devices.

Max Frames Per Second: This determines the rate at which screenshots are captured from the iOS device. The default value is 0.0, which is an unlimited rate. To reduce CPU usage and load on the machine, set frames per second in the range between 1 and 3 for every iOS device you're automating on that Mac.

Note: Reduced frame rates might lead to poor image location and automation performance. This can happen because quick screen updates might caught mid-animation when fewer frames are captured per second.

This section displays only when you're automating physical devices.

This section displays specific information about a selected device:

Name: The name of the iOS device.

Model: The model name of the iOS device.

OS version: The version of the OS running on the device.

UDID: The Unique Device Identifier specific to the device.

The Screen tab shows the screen of the connected device. This tab is view-only.

The Diagnostics tab helps you troubleshoot problems with connectivity, provisioning, Xcode, and more. See The iOS Gateway Diagnostics Tab to learn more about using this feature.

The panel at the right side of the iOS Gateway GUI lists the apps that are installed on the iOS device that's selected in the device list. You can right-click on an app from the list to perform actions like refreshing the list of apps or copying the bundle ID of an app.

The Application Information pane displays at the bottom of this list. This pane can be toggled open or closed, and the option you choose persists between sessions. This pane displays the following information:

Name: The app name that displays on the screen of the iOS device.

Version: The release version of the selected app.

Bundle ID: The full name of the app. For example, the bundle ID for the Safari browser is com.apple.mobilesafari.

Developer signed: Whether or not the app is signed for developer use.