After you have signed your app for development use, you can install it on the iOS device for testing with iOS Gateway. If you need information on signing your app, see Signing Apps for Use with iOS Gateway.

There are four ways to install an app on the device:

You can install your signed .ipa files directly on the device through iOS Gateway. Follow the steps below to use this method:

When installation is complete, you should see the app appear on one of the home screen pages of the device. If the app is signed with a development provisioning profile, the app also appears on the sidebar in iOS Gateway under the device.

Installing Through the Devices Window in Xcode

To install your app on the device through Xcode, follow these steps:

The app might not immediately appear in the sidebar of iOS Gateway. If Xcode shows the app as being installed but you're not seeing it in the iOS Gateway list, click the refresh button at the top right of the iOS Gateway sidebar.

Use the InstallApp Command

The InstallApp command lets you install a signed .ipa file onto your device from a script. For information about using this command, see InstallApp Command. 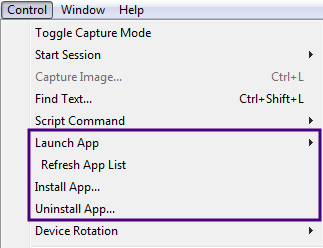 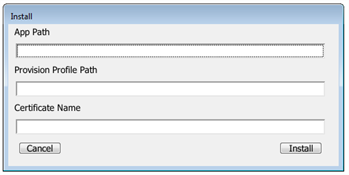 Uninstall an App via iOS Gateway

Note: Any apps you uninstall manually on the device still appear in the list of apps in the iOS Gateway sidebar until you click the refresh button at the top of the list, or until you restart iOS Gateway.

Note: The available apps list might not reflect apps that have been recently installed or uninstalled. Use the Control > Refresh App List option to have Eggplant Functional retrieve an updated list from the device.