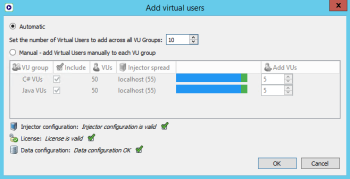 If the total number of VUs of a particular type will exceed the maximum number allowed by the Eggplant Performance Node Locked Expiring or Floating Expiring license(s) currently available, the dialog will prevent the VUs from being added to the test in progress. For more information, see Understanding Eggplant Performance license types.

The following problems all relate to settings defined in Eggplant Performance Studio. However, changes made in Studio don't take effect in Test Controller until after the test has finished.

Note that you might not be able to add extra VUs to the test in progress if: