During the web recording, it is likely that web requests were made to hosts that are not intended to be part of the test. The Filter hosts page of the wizard enables you to filter out hosts that shouldn't be contacted during a test. 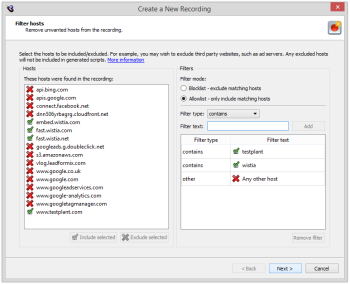 The list of hosts: to which requests were made during the recording - are listed on the left. Each is displayed with an icon to indicate whether recorded web requests made to that host will be included in the generated script or not.

On the right are the filters that will be applied to the list of hosts.

Note: These filters will also be applied during a test.  For example:

The filters can operate in one of two ways:

Blocklist: any host that matches the filter will not have any requests made to it during a test. Requests will be made to any other host. Use this to exclude specific unwanted servers, such as advertising services.

Allowlist: (default) only hosts which match the filter will have any requests made to them during a test.  Requests will not be made to any other host.  Use this if you know exactly which hosts you are trying to test.

As you type in the Filter text box, the list of hosts will update automatically to show the effect of the filter you are about to add.

You can add exact match filters for particular hosts in one of two ways:

Select one or more hosts in the list of hosts, then right-click one of them and click Include selected or Exclude selected

Filters will be added or removed from the list in order to include or exclude the selected hosts.  A warning message will appear if the filters are too complicated to be modified automatically. 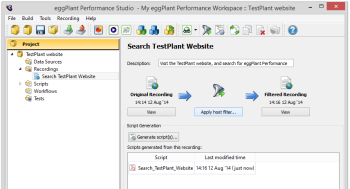 Important: Regenerating a script will remove any manual edits that are not within the defined Regions in the script—that is, any changes you made in an IDE or text editor since the script was generated. We recommend only editing the within those regions.