The Eggplant AI Designer provides an alternative workspace for creating models from scratch without prior experience of creating models in Eggplant AI UI. On the Designer page, you create a model by capturing various aspects of the UI while still interacting with the screen of a system under test (SUT). For example, you can capture the interactive elements of a screen such as buttons, tabs, checkbox, and text box to add them as actions within a state while connected to a SUT.

The Designer tab also includes a Script Editor that lets you edit scripts associated with the active model.

New Feature: Designer is available in Eggplant AI 3.0 and later.

Follow the steps below to create a new model using the Designer button in the toolbar. Alternatively, if you prefer building models in the Eggplant AI UI, you can do so by returning to the Eggplant AI Model tab.

To build your model in Designer, follow these steps:

Note: The model name can't contain spaces and the only permitted special characters are underscore (_), tilde (~), and hyphen (-).

A spinner icon appears while waiting for the agent to make the connection to your SUT. After the agent establishes a successful connection with the SUT, the following two things will happen:

Note: A warning message appears on the SUT view page if you do not have an agent configured, or if you are unable to make a connection to your SUT. 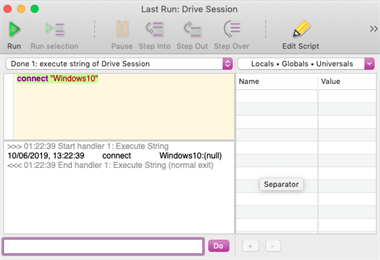 The Run window showing the script execution on the SUT

If you entered the App details in step 5 and clicked Next, a Start action is added to the Initial state, linking the relevant script file to the action. In addition, a cleanup snippet is linked to the default Cleanup state for automatically calling it for closing applications. You can view your app being opened in the SUT view by clicking Launch app on the App details page. For example, if your script includes launching of an app, such as calculator, the SUT view will show launching of it using the SenseTalk script that was generated in the previous step.

Note that every UI element you capture in Designer becomes an action for the selected state in Eggplant AI UI. A SenseTalk script is automatically generated for the highlighted UI element on the SUT screen and saved to the valid suite folder as you draw around the selected element. Any changes to the element location will then update the script accordingly.

Note: You enter the action information as you capture a screen element. To delete the selected screen element, simply select it in Designer and manually delete it.

You may want to specify an exit state for the model by associating a valid action with the predefined Exit state in the Connections from action menu. You can also add previous actions, global actions, and sequent actions at this point in the same way as before.

New Feature: The Script Editor is available in Eggplant AI 3.0 and later.

Editing a script in the Script Editor

The Script Editor displays all the script files and CSV files available for the associated Eggplant Functional suite in a tree view format in Designer.

Follow these steps to edit an existing snippet in your model:

The following message appears on the Script Editor, if any of the above prerequisites are not met:

To undo changes made to the selected script, click Discard.