When you are modeling large or complex applications and systems, it might be useful to take a modular approach to creating your models. To facilitate modularization, Eggplant AI lets you use submodels. A submodel is a model that you connect to an action of another model in the same way you connect code snippets. In this way, you can build large models out of smaller, modularized pieces.

New Feature: Submodels are available in Eggplant AI 2.2 and later.

As you build your models, you might focus on individual sections or subsystems of your applications in order to slowly build up the total picture of what you need to test. If you take this approach from the start, it should be easy to see how you might employ submodels in Eggplant AI to bring together all the pieces of your application.

With this approach, you can test sections of your application independently, and also bring the independent models together into a top-level model for comprehensive testing by linking the section models as submodels. Linking submodels within actions allow you to define a hierarchy of different levels of model to describe your application. When selecting actions to execute, Eggplant AI’s path selection algorithm considers paths in the submodel that haven’t been traversed yet.

Any model can be used as a submodel. To see your available models, select the Models tab in the left pane of Eggplant AI. The Models tab lists any model you have created as well as any model saved within your group. (For information about groups in Eggplant AI, see Eggplant AI Administration.) 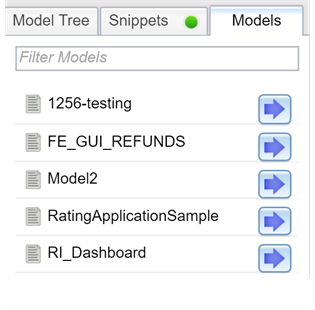 The process of running a test with a submodel is no different from any other test execution in Eggplant AI. When you click Play on the toolbar, the model begins with the initial state and chooses a path through the model. When it selects an action that has a submodel attached, the execution switches to that secondary model.

In the Eggplant AI console, you can see that the model has called the submodel, and what steps are performed there. The model view in the workspace, however, doesn't change—it still shows the single highlighted action that called the submodel. 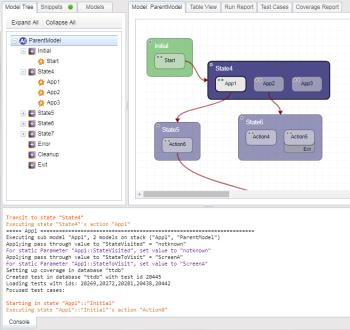