The Viewer window shows an image of the system under test (SUT) as you would see it on its own display.

Tip: To toggle between Live Mode and Capture Mode quickly, press Control on Windows or Command on Mac. You can select a different key to perform this action in Viewer Preferences. 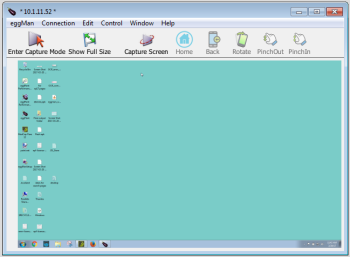 The Viewer window in Live Mode

Note: If the Viewer window is not your active window, your clicks and keystrokes are applied to your local computer, not the SUT. 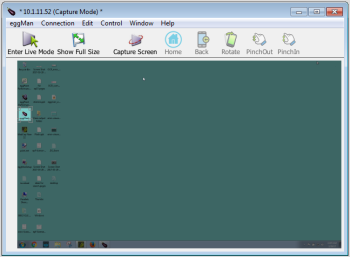 The Viewer window in Capture Mode

In Capture Mode, you can capture images of your SUT using the Capture Area. These images can then be used with Eggplant Functional scripts. You continue to receive display updates from the SUT, but your mouse and keyboard events are applied to your local computer. The Viewer window is dimmed in Capture Mode, except for the Capture Area, described below.

To save the image, double-click the Capture Area. This action brings up a save image dialog box that lets you save the captured image in a specified location on your local system. Images captured with Eggplant Manual are compatible for use with Eggplant Functional scripts.

In Capture Mode, the Capture Area shows the area that is included when you save an image. It is the rectangle shown at normal brightness when the rest of the Viewer window is dimmed.

If you click an area of the screen where there is no image, or Eggplant Manual can't detect the edges of an image, the Capture Area still moves to that location and the size is set to the default, 64 X 64 pixels. You can use Shift+click to move the Capture Area to an image without using edge detection; the Capture Area moves to the new location without changing size so that you can manually adjust the edges as you wish.

To resize the Capture Area, drag its edges. You can also nudge the size one pixel at a time with Alt + arrow (Option + arrow on Mac) keys. Add the Shift key to resize in ten-pixel increments.

Note: The Capture Area is drawn with a gray border to make it easier to see on dark backgrounds; you can turn this border off in Viewer Preferences.

With full-screen control, you can view the SUT as your entire desktop. A small control panel provides access to the regular Viewer window features.

To open the control panel, choose Control > Control Panel from the menu.

To customize the buttons displayed on the control panel, right-click in the panel, and choose the Viewer window items that you want to display from the drop-down list.

To return to your own desktop, click Exit Full Screen, or use the keyboard shortcut Option + Command + 1. 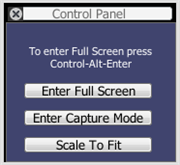 Most of the buttons in the Viewer window toolbar are also represented as menu items in theControl menu.

The toolbar buttons are described below. Since the toolbar can be customized, you might not see all of the buttons on your own toolbar. For more information about adding and removing toolbar buttons, see Customize below.

Note: You can also toggle between Live Mode and Capture Mode quickly by pressing Control on Windows or Command on Mac. You can select a different key to perform this action in Viewer window preferences.

Note: Switching between the sizing options has no effect on the functionality of the Viewer window, image captures, or image matching.

The Capture Screen button takes a snapshot of the entire Viewer window of your SUT.

Although screen captures in your Images directory appear in the Images pane of the Suite Editor, they are not added to a script when you choose Capture Screen. Instead, Capture Screen is useful for other purposes, such as reporting, documentation, and interface design discussions.

The Home button presses the home button on mobile devices.

The Back button presses the back button on Android mobile devices.

The Rotate button rotates the screen of mobile devices in the Viewer window 90 degrees clockwise.

The PinchIn and PinchOut buttons perform those actions on a mobile SUT. They don't work on the home screen. Note that the actions might display more slowly in Eggplant Manual than they do on the SUT itself.