The Image Update panels help you manage, modify, and work with previously existing images during and after runtime. The panels are triggered when an image or text search is unsuccessful. When a search failure occurs, depending on the settings selected, you either see the Image Update panel, or the Auto Update panel.

The Image Update panel is shown during runtime at the time of search failure. It allows you to change existing image search settings, capture new images, create collections, or replace previously existing images in order to remedy the search failure before continuing the script run. The Auto Update panel displays following a script run where an image search failure occurred, and Eggplant Functional found a remedy, modifying the search settings in order to find a match. Those changes can be saved automatically to your script and assets.

See the Image Diagnostics section on The Image Viewer page for information about image search settings and selecting diagnostic searches.

The Image Update panel lets you work with image diagnostics and fix image searches when an image is not found during a script run. Depending on the selected settings, this panel also appears when multiple instances of an image are found that were not anticipated by the script, and can also trigger the Auto Update functionality, allowing you to save any changes made to images during the script run. 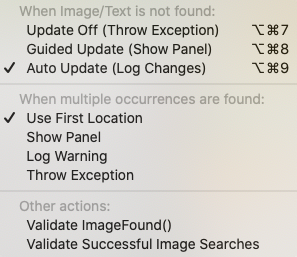 Note: Eggplant Functional allows you to enable both Auto Update and Validate Successful Image Searches at the same time. Doing so forces your system to run Auto Update on every search and can cause your scripts to run very slowly.

Your choices when using the Image Update menu are as follows.

When an Image or Text Is Not Found

When Multiple Occurrences Are Found

Note: These options only display messages when the main panel setting regarding its response to a failure to find an image or text is set to Guided Update (Show Panel). See When Image/Text is Not Found.

The Image Update panel comprises three tabs, described in more detail below: The Start tab, the Diagnostics tab, and the Properties tab. Each tab allows you to make adjustments that make your Eggplant Functional scripts more successful. 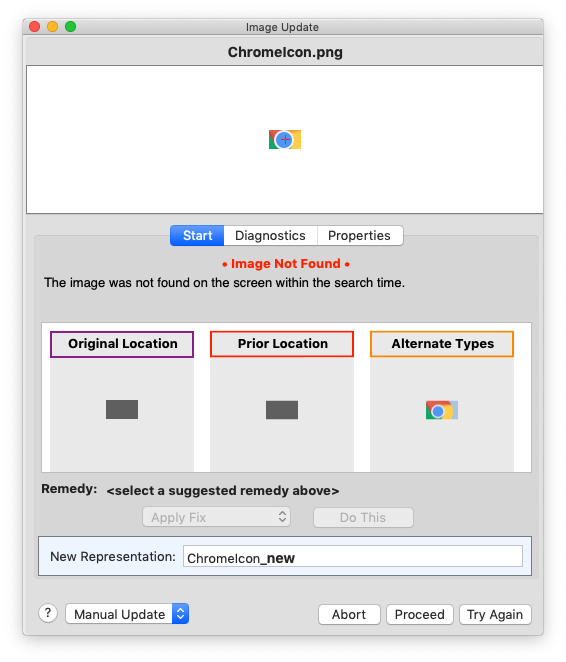 The Start tab in the Image Update panel

The Image Update panel opens with the Start tab displayed. The Suggested Remedies section of the panel offers options to fix or replace the image that can't be found based on the following diagnostic searches performed by Eggplant Functional:

Note: The remedies that appear in the Image Update panel provide a fix that either allows the image to be found exactly once on the current SUT screen or offers the possibility of capturing a new image at a specific location on the screen. Each option shows the image that would be captured from the current screen if used.

Selecting a Suggested Remedy shows a highlight rectangle on the SUT screen in the color for that diagnostic. The Remedy drop-down list changes depending on the option you choose. Available remedies are:

Select a Remedy action from the drop-down list, then click Do This. For the options listed above, Eggplant Functional fixes the image and tries the search again.

Note: If you select Standard Search as the remedy, none of the Remedy actions are enabled. Clicking Do This logs a warning telling you to change the timing in the script before trying again.

The Diagnostics tab lists the results of diagnostic searches so that you can see what settings can be adjusted or what search types can be used in order to find the image on the screen. The options listed correlate to the options in the Start tab, described above.

To use the Fix, Recapture, or Add Rep (which stands for Add Representation) buttons, select an appropriate diagnostic search that returned positive results. For instance, in the example below, the Original Location can be used to Fix the image: 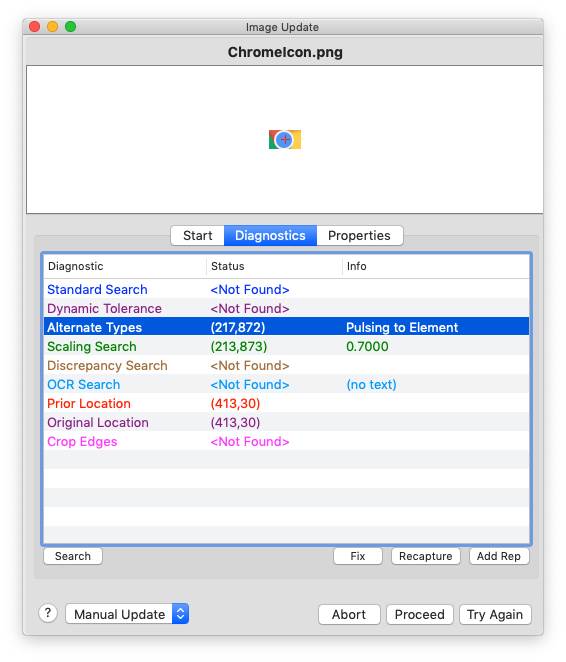 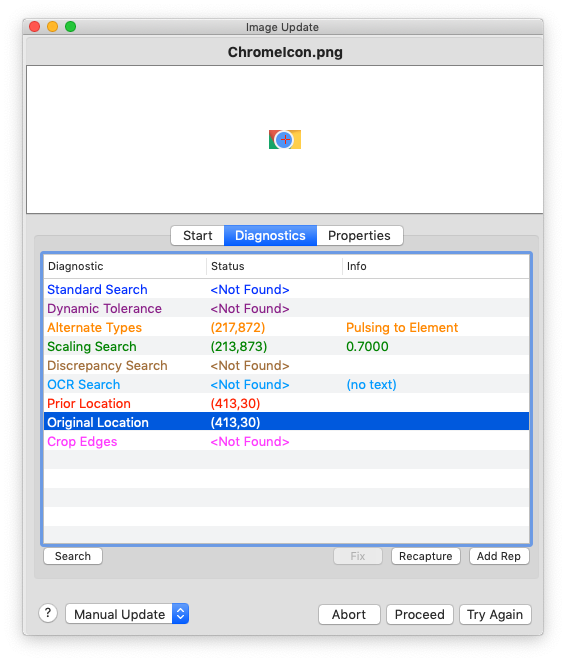 The Diagnostics tab in the Image Update panel

Recapture captures the image again using the location where the selected search type is finding the image. Add Rep adds a representation of the image to an image collection, or creates a collection if one does not already exist. 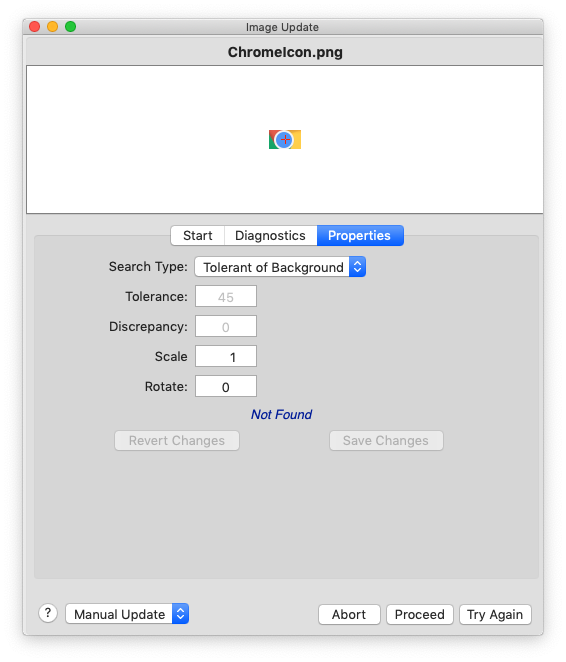 The Properties tab, visible in the Image Update panel

Use the Properties tab to manually adjust different image settings without permanently altering the state of the captured image in your suite. You can change the Search Type, Tolerance, Discrepancy, Scale, and Rotate values in this panel, then press Enter to conduct a search of the current active connection to see what settings work best. The original settings show to the right in red. To fix the image permanently, click Save Changes. To revert to the original settings, click Revert Changes.

Working with Images in the Viewer Window 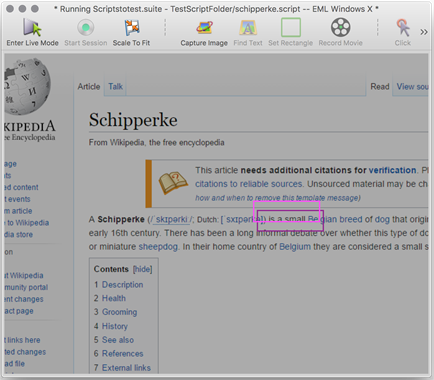 The Viewer window during an Image Update panel Diagnostic Search

When an image is not found, or multiple instances of an image are found, the Image Update panel appears and conducts a variety of diagnostic searches. The results are highlighted in the remote screen window. Boxes of corresponding colors are shown in every location on the screen of the SUT where an image is found with one of the diagnostic searches.

Hovering over one of these colored squares turns the square white.

A highlighted image match in the Viewer window

If clicked, the capture area snaps to that box, and you can use that selection to add a representation for an image collection, or fix the current image that you are working with in the Image Update panel.

A selected image match in the Viewer window

Clicking the arrow to the right of the capture area in this instance brings up the following drop-down menu:

Tip: The arrow to the right of the capture area that reveals this drop-down menu is disabled when you hold down the Command or Control key to move the hot spot relative to the capture area. This behavior enables more precise placement of the hot spot, especially when using captured images to create search rectangles, as might be done with an OCR search.

Select Auto Update (Log Changes) from Run > Image Update to enable the Auto Update panel. The panel appears at the end of every script run and presents all failed search instances from that run that were found using asset healing. When an image or text is not found, Auto Update looks for and then applies remedies to that image or text search's settings during the script run in order to find a match. In some cases, image updates can be automatically applied and saved.

For each of these instances, the image or text not found displays in the upper left corner of the panel, along with the settings Auto Update used during the script run to find that text or image. A screenshot of the SUT at the time of search failure occupies the lower portion of the panel. This screenshot also shows the location of the found image or text, and the original location, if available.

The Auto Update panel shows you the remedies for a script run. If you select Identify Remedy only, you see the image remedied and the Apply button for you to decide if you want to make the changes permanent. If you selected Auto Apply, you see the image remedied and Changes Applied. Eggplant Functional changed your image and saved those changes permanently.

If Eggplant Functional uses a remedy that is configured to be automatically applied, it makes any needed changes and saves them to the image for future use. To enable Asset Healing, select the Auto Apply checkbox next to the search type you want to use in the Asset Healing section of the Run preferences tab. When the script run ends, the Auto Update panel opens and shows which diagnostic remedies were used to make the script succeed. You define the thresholds for the diagnostic remedies in the Run preferences tab. Those thresholds enable automatic asset healing.

When you're using Asset Healing, the Auto Update panel still opens after the script run finishes and reports any remedies that were applied to your assets to make the test pass. If your defined threshold was not met during execution, messages in the Auto Update panel will suggest what threshold setting would have automatically updated the image.

Auto Update tests the image and OCR diagnostics in the order they are seen on the Run preferences panel (Dynamic Tolerance, Alternate Types, Crop Edges, Scaling Search, Discrepancy Search, OCRSearch). This means that if it finds a diagnostic that works that comes earlier in the list, it will always choose that over another diagnostic that comes later.

The following examples show how asset healing can improve your workflow.

In this example, Auto Apply is enabled in Run preferences, but the threshold for the search type has not been met. The user must adjust the threshold to make search succeed.

In this example, Auto Apply is enabled in Run preferences, and the threshold for the Dynamic Tolerance search type is satisfied, so Eggplant Functional automatically made the change. The Apply button in the Auto Update panel is disabled in this scenario.

With Identify Remedy selected in Run preferences, the Auto Update panel presents all remedied search instances from the recently completed script run. For each of these instances, the image or text not found displays in the upper left corner along with the settings Auto Update used during the script run to find that text or image. A screenshot of the SUT at the time of search failure occupies the lower portion of the panel. This screenshot also shows the location of the found image or text, and the original location, if available. 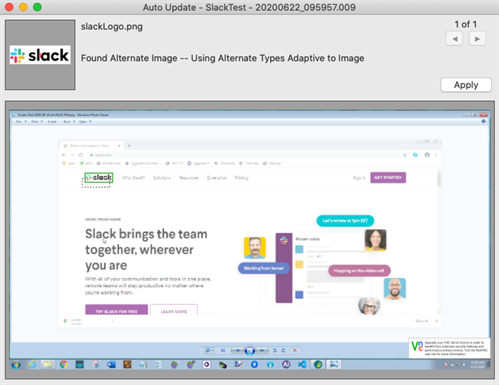 In the first example, Eggplant Functional has suggested a remedy that the user needs to apply. Identify Remedy is selected, but not Auto Apply.