Getting Started with Eggplant Manager

Eggplant Manager is a test management system that lets you manage your Eggplant Functional suites, define tests, schedule test runs, and analyze results all in one central location: Your web browser. Eggplant Manager provides you with the easiest way to run multiple tests or instances of a test simultaneously against different devices.

The following list of basic concepts explains what you need to know to work with Eggplant Manager.

Tests are a set of scripts that you want to run in sequence against a particular system under test (SUT).

After you define a test, run it on demand using the Run Now button on the Tests page. You can create a schedule to run the test at a specified time or at a certain interval. For each of these run options, specify how many instances of a test you want to run simultaneously (up to the number of Eggplant Functional licenses available). For detailed information about schedules, see Creating Test Schedules in Eggplant Manager.

After a test finishes running, view the results on the Results page. Results are grouped by test, instance, and then script. You can find failures quickly and drill down to the necessary detail to determine the likely cause of failure. For more information about results, see Viewing Eggplant Manager Test Results.

Below is a high-level overview of an example test system in Eggplant Manager. It shows the following: 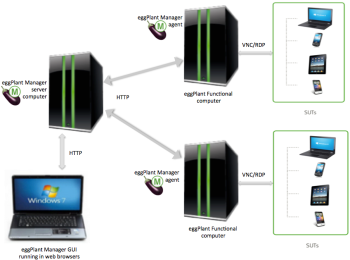