Getting Started with Eggplant Performance

Eggplant Performance testing simulates the actions of real users with efficient, low-overhead, and consistent virtual users (VUs). As such, VUs represent a method for quickly, simply, and repeatedly assessing the performance of a SUT, resulting in shortened product cycles and an improved user experience of an application.

Eggplant Performance includes a number of powerful and easy-to-use tools that facilitate the creation of dynamic VUs. These tools allow you to create complex, advanced tests where each VU has its own unique data and timings. Additionally, you can set up groups of VUs to run different scripts or workflows within the same test, simulating a variety of user stories. By acting as an engine for coordinating the execution of dynamic and variable VUs, Eggplant Performance simplifies the process of deploying realistic performance tests against a SUT and its environment.

What Does an Eggplant Performance Test Environment Look Like?

The Eggplant Performance test environment consists of the following components:

Controller machine: where you design and initialize tests.

Injector machine: where you run tests.

System(s) under test (SUTs): which can include back-end databases and web servers, or instances of a front-end client.

In cases where a limited number of VUs are required, the controller machine and injector machine can consist of a single physical machine. The addition of injectors enables the straightforward scalability of tests. 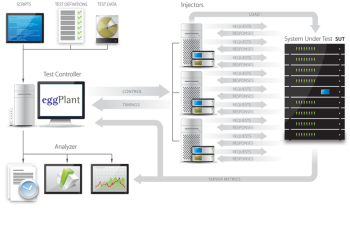 Which Technologies Can Eggplant Performance Test?

Eggplant Performance is compatible with standard development environments such as Microsoft Visual Studio (including Express Editions) and Eclipse for test script development. Supported programming languages include C, C++, Java, and C#. You can script test runs using Python, and there is a REST API for automating analysis.

There are four main components of Eggplant Performance: