Establishing connections to Android devices in Android Gateway works the same way for all operating systems.

You can connect to multiple Android devices simultaneously by following the above steps and choosing a different device from the list of detected devices for subsequent connections.

To terminate a connection, click the stop button in the Android Gateway UI.

From the main Android Gateway UI, click the three vertical dots, then select Console from the context menu to open the log for a connected device. 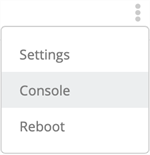 Logs are stored in different locations on different operating systems: