The Results pane in the Suite Editor contains records of the tests you have run in the current suite. For each script, there is a record of all of the tests performed, the complete results log for each test, and images captured during script execution. 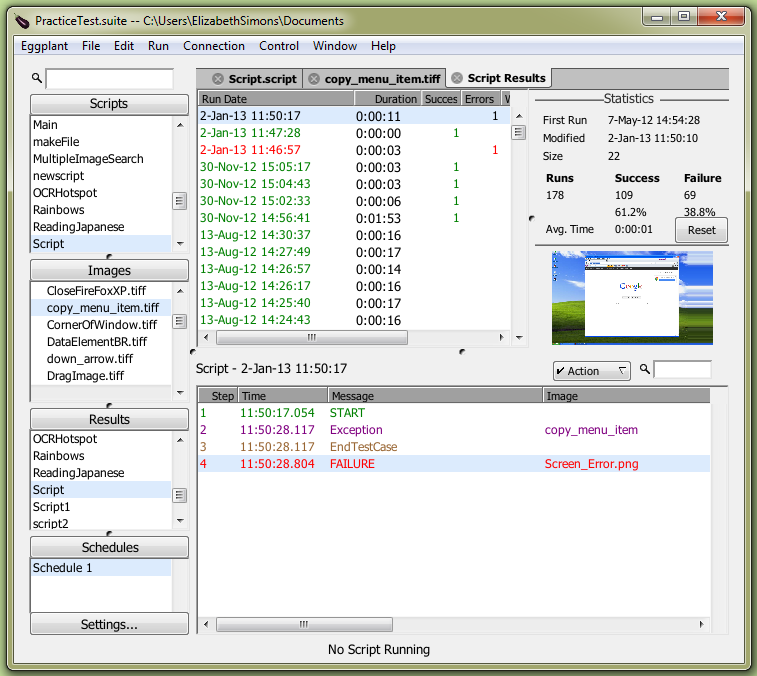 Eggplant Functional records a number of different types of run data such as suite statistics, run history, and log files. These different data types and their uses are described below.

A RunHistory.csv file is a comma-separated text file that summarizes all of the executions of a script, with one line for each execution. The first line of this file identifies each of the fields:

This format can be read by many programs, including spreadsheets such as Excel. The second item on each line (Status) is Success or Failure, so simply reading the last line of this file can be a simpler way to find out whether the latest run of a script succeeded, rather than digging into the LogFile.txt file in the individual run folder.

The SuiteStatistics.csv file is another comma-separated-value file, this time with one line for each script that has generated statistics. The fields on each line are:

The CSV file format is very easy to import into a spreadsheet program, such as Excel. This section describes some of the other ways to handle your results.

Eggplant Manager is the easiest and best way to collect and analyze Eggplant Functional test results.

This test management tool is a browser based application that provides a single point of control for Eggplant Functional suites. It provides the ability to define tests, as well as schedule execution of multiple tests simultaneously, as well as a central location for the collection and analysis of results.