The Run window displays information about the currently running script. In the Run window you can manually control script execution, view script output as it is generated, see and modify variables, and follow the progress of the script with animation or tracing. 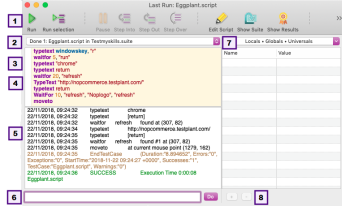 While a script is running (and not paused), you cannot perform any manual actions in the Viewer window, or open and close VNC connections.

Note: You can run the script in debug mode by Alt-clicking (Option-clicking on Mac) the Run Script button. This loads the script for execution and immediately pauses it, allowing you to step through line by line. This is the same as choosing Run > Debug Script.

The Run Selection button executes only the selected part of a script. The selection does not have to include an entire line of code, but it must be syntactically complete and executable. (For example, if you select the beginning of an if block, you must select all the way through the endif statement.)

You can run the selection in debug mode by Alt-clicking (Option-clicking on Mac) the Run Selection button. This loads the selection for execution, but immediately pauses it, allowing you to step through it line-by-line to closely follow its execution.

Note: When you run a selection, results are not generated in the Results pane of the Suite Editor.

The Pause/Continue buttons allow you to pause and continue execution whenever a script is running.

When the script execution is paused, you can perform additional operations:

During the execution of the script or handler that is stepped over, you can click Pause to regain control of the execution before the Step Over command has finished.

Step Out executes all the remaining lines in the current script or handler, then pauses. (Using Step Out on your initial handler is the same as clicking Continue.)

During the execution of the code being stepped out of, you can click Pause to regain control before the Step Out command has finished.

The Show Suite button opens the current script’s suite in the Suite window.

The Show Results button opens the last recorded results for the current script, in the Results pane of the Suite window.

Animations cause scripts to execute more slowly, because Eggplant Functional is doing more work at the display level. You can improve script execution speed by turning off all animations when you are not debugging.

Animation Off: The Display area of the Run window does not update as the script runs; only the initial handler for the script is shown, unless the execution is paused.

Animate Calls: The Run window shows each script or handler as it is called, but it does not highlight each line of the script.

Animate All: The Run window highlights each line of each script or handler while it runs.

The Script Tracing menu is available as a selection box or pop-up menu, depending on the width of your window.

The Script Tracing menu on the Run window toolbar

Tracing causes Eggplant Functional to "echo" information about what the script is about to execute to the Log Area in the Run window. This is similar to animation, but it allows you to review all of the code that is executed during the script run, interspersed with logged output. This can provide more context when debugging a script.

You can change trace settings at any time with immediate effect, even while a script is running.

Trace Calls: The Log Area of the Run window displays a message as it enters and leaves each script or handler.

Trace All: The Log Area of the Run window displays every line of each script or handler prior to executing it.

Note: Tracing causes scripts to execute more slowly, because Eggplant Functional is doing more work at the display level. You can improve script execution speed by turning off tracing when you are not debugging.

Note: The Variable Watcher does not continue to display variables after a script finishes running.

The Show Variables menu is available as a selection box or pop-up menu, depending on the width of your Run window.

The Show Variables menu on the Run window toolbar

The Show Variable menu options are as follows:

When Paused: This option enables the Variable Watcher and shows the pane in the Run window. With this setting, you can only see and modify the variables when a script is paused.

Always: This option enables the Variable Watcher and shows the pane in the Run window. With this setting, you can see and edit the variables both while a script is running and while it is paused.

Note: Even when you use the Always setting, the variables only display while your script is running or paused. You will not see them after your script finishes running.

The Script Frame pop-up menu displays the handlers that are being executed, listed in the reverse order in which they are called.

When script execution is paused, you can select a different frame from this pop-up menu to view it in the Script Display area and see which line it is currently executing. This also sets the context for commands typed into the Ad-hoc Do Box. For example, if you want to output the value of a variable that is present only in the script handler that started your execution, you must make sure to select the very bottom frame, numbered “1.”

Note: A handler is a unit of execution in SenseTalk. If a script does not explicitly declare a handler, the entire script is treated as a handler. (For more information on handlers, see the SenseTalk Reference Manual.)

Dynamic breakpoints are markers that cause a script to pause for debugging at designated points. They can be added or changed at any time, even while the script is running.

You can set a dynamic breakpoint in the Run window by clicking in the column to the left of the Script Display area. A black triangle appears next to the line, denoting the breakpoint. (You can also set a breakpoint at your insertion point in the script by choosing Run menu>Set Breakpoint.)

You can move a breakpoint by dragging the triangle to another line in the script, or remove it by dragging it out of the column.

The Log pane is the lower half of the Run window. As the script runs, the Log pane displays the following information:

You also can view this information in the Output/Script Checker pane of the Script Editor.

The Ad Hoc Do Box (AHDB) allows you to modify a script while it is running. You can enter SenseTalk code in it to assign new variable values, execute commands, or call other scripts. It also keeps a history of everything you enter, so you can rerun previous entries. AHDB is located at the bottom of the Run window and is always shown.

Note: The AHDB executes the SenseTalk Do command to run your code. However, you will not see this command in the log when you use it.

Using the Ad Hoc Do Box

To use AHDB, enter the SenseTalk code you want in the box as follows:

Important: Pressing Enter in AHDB has the same effect as clicking the Do button—it executes the code. It does not function like a carriage return for you to enter a new line.

Working with the History

AHDB also provides a history option. This enables you to return to code that you previously ran and run it again. The history is saved for the duration of the Eggplant Functional session. It will be cleared when you restart.

Note: The Variable Watcher does not continue to display variables after a script finishes running.