To run Eggplant Functional on your machine, you need to enter a valid license. If you need to purchase licenses, contact your account manager or sales@eggplant.io. You can also request a free trial license by visiting the Eggplant website.

There are several options for licenses for Eggplant Functional. Different license types determine how many instances of Eggplant Functional can run at once, and whether users can create and debug scripts or solely run those scripts.

Note: When you launch Eggplant Functional for the first time after installation, you are required to agree to the Keysight EULA.

If you have obtained a floating license, you may install one or more copies of the Software on any computer, instrument, or machine within your internal computer network or on dedicated server resources provided by a third party for your internal business use, provided the total number of users who are accessing or using any of the Software at the same time does not exceed the maximum number of licenses.

The license is issued for a specified number of users and tracked on a Reprise License Manager (RLM) license server. Every time an instance of Eggplant Functional launches, it checks the RLM server for available licenses, and issues those licenses (if available). For information about setting up and using RLM, see Using RLM for Team License Management.

With floating licenses, it's possible for users to roam those licenses for up to seven days. This capability means that the license remains checked out to a particular machine for a set amount of time. See Roaming Licenses for more information.

If you are unable to run the RLM license server in your environment, contact your account manager for information about single-user node-locked licenses, which are tied to a specific workstation.

As an Eggplant customer, you have access to the Greenhouse web portal, where you can review and create available licenses as well as download generated licenses for your account. You can also use this portal to submit questions to support and view information about any support cases.

Before you can use Eggplant Functional for testing, you need to generate a license. To generate a team license, you need the host ID of the machine where the license server will run. See The Eggplant License Registry Panel section below for information about how to find your host ID.

In general, you must enter a license the first time you launch Eggplant Functional. You'll be presented with a licensing splash screen with several options to enter your license: 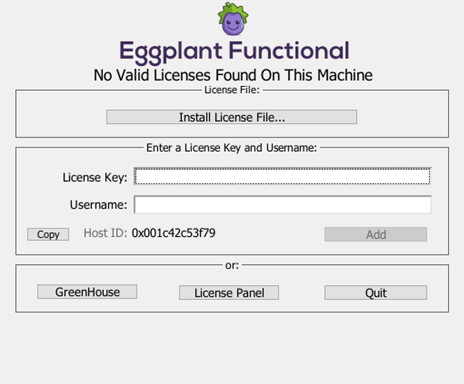 You must enter a valid license to run Eggplant Functional.

Note: If there is a team license server running on your network, and there is an available license on that server, Eggplant Functional might detect and use that license. In that case, the license panel doesn't appear automatically on launch.

If you have a license file (a text file with a .lic file extension that contains the encrypted license key), follow these steps to license Eggplant Functional:

If you have a license key and username, follow these steps: 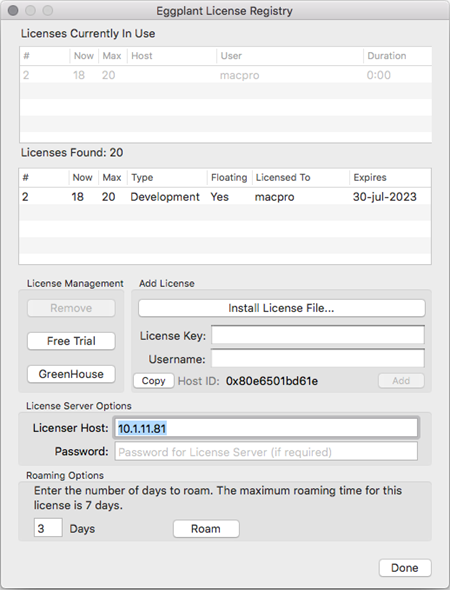 Licensing From the Command Line

Sharing a License Between User Accounts

By default, your Eggplant Functional license is stored in the /Library/Eggplant directory, which is accessible to all user accounts. However, if the user who installs Eggplant Functional does not have permission to write to that directory, the license is stored in the user’s own Library directory. To make the license accessible to all users, someone with the appropriate permissions must move the license to /Library/Eggplant.

By default, your Eggplant Functional license is stored in the C:\Library\Eggplant directory, which is accessible to all user accounts. However, if the user who installs Eggplant Functional does not have permission to write to that directory, the license is stored in the user’s own Library directory. To make the license accessible to all users, someone with the appropriate permissions must move the license to C:\Library\Eggplant.