The notes below provide descriptions of the new features and changes introduced with each release of Eggplant DAI. You are strongly encouraged to read about the relevant changes whenever you upgrade from an earlier version.

You are now able to edit existing test cases. You can add and remove test case steps anywhere in your test case.

The execution environment against which your test ran is now shown in the test results page. If there are problems with the environment, the details of the environment can be more easily identified thereby facilitating troubleshooting.

Live test runs can now be canceled more easily. Navigate to the test results page, find the test run that is in progress and that you wish to cancel and cancel it at a click of a button.

An access group with the same name as the user used to get automatically created for every user up until DAI version 6.3. We now allow sharing access to models directly with users and will no longer create those user-aligned access groups. With that design decision in mind, during the 6.3 upgrade process:

DAI CI/CD integration can now return the results of tests triggered as part of your build pipeline, so that these can be viewed directly from the UI of your chosen build platform.

Visit the downloads page to begin your upgrade.

The Model Preview has been further enhanced to provide you with more information about the model whilst it is being previewed. This will make it easier and quicker for you to understand the model that you are previewing.

Test configuration step execution logs are now available. This will provide you with the ability to see the details of each step during a test execution and will help you troubleshoot should your test run fail.

Delete all Results from a Single Test Config​

With a single click you are now able to delete all test results that correspond to a single Test Config run. All the associated artefacts including screenshots will be deleted. This will allow you to remove irrelevant or obsolete test results quickly.

Access to Execution Environments has been simplified and is no longer restricted according to which models you can access.

SUT passwords are no longer visible to ensure confidentiality and security.

Side Menu and Sub-menu​

The sub-menu items expand and collapse based on your input and not automatically as was previously the case. You will now be able to navigate through the menu options with greater ease.

You are able to view the user journey details.

Test cases are now easier to build, debug, and run so you can see results more quickly: 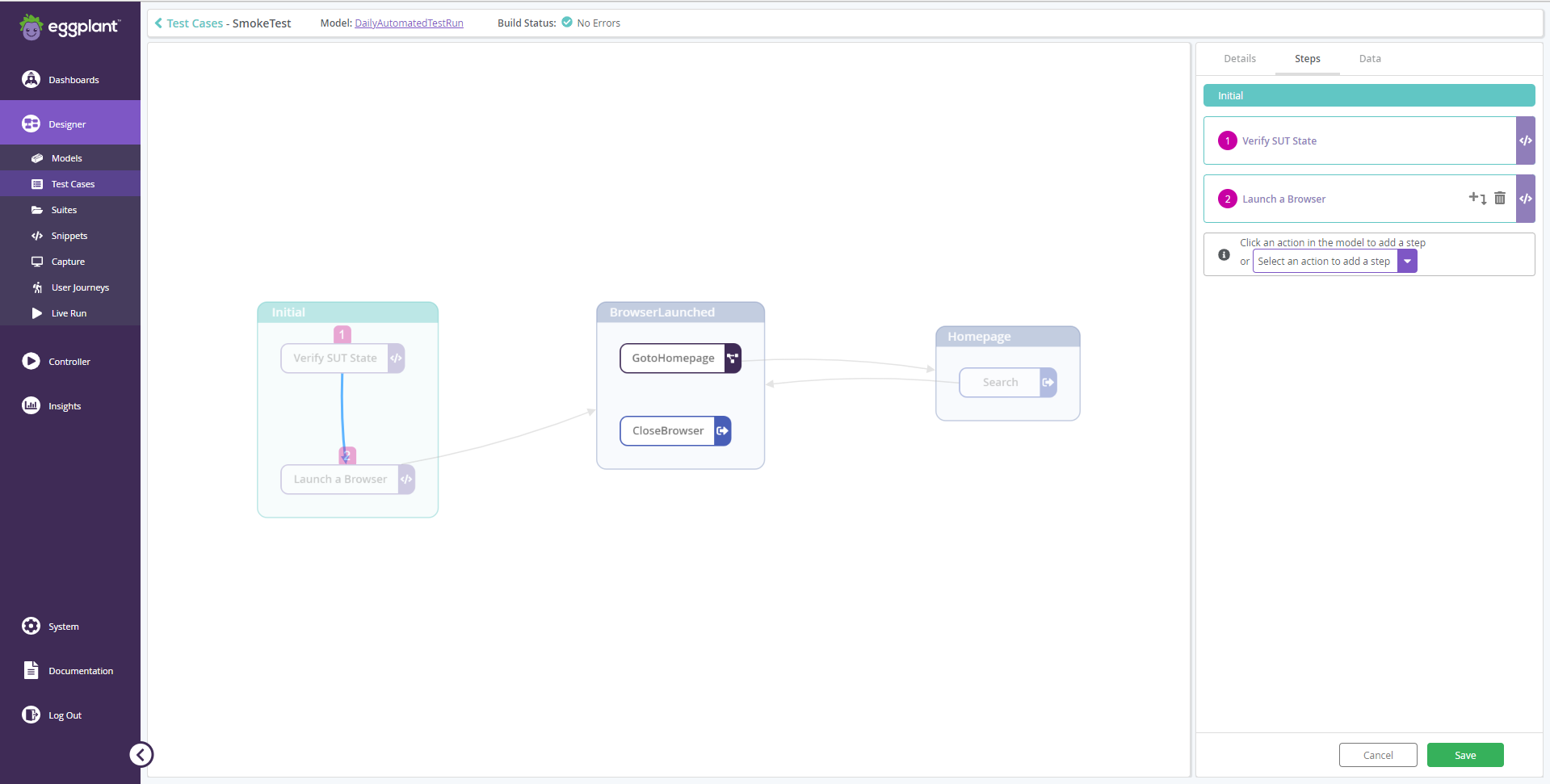 Go to Designer > Test Cases and click Add New + to start using the new Test Case Builder. To save time, you can also duplicate and edit an existing test case rather than starting from scratch.

To enable test case improvements, all existing test cases are migrated to a new database schema and are validated as part of the upgrade to DAI 6.1. During migration, the following characters are replaced by underscores (_) in all test case names: " \ ; : { }.

In some cases, test cases may fail validation, in which case they will not start. To continue to use these test cases, open them in the Test Case Builder and follow the on-screen text to resolve any errors.

You can now go straight to a linked test case from the Test Results view. From the same view, you can also quickly remove test cases that you no longer need.

The Eggplant DAI navigation is now available on every page of the application to make it as easy as possible to switch between tasks.

The toolbar in the Model workspace has been simplified for ease of use, and a top menu gives you shortcuts from the model you’re working on to other test resources. 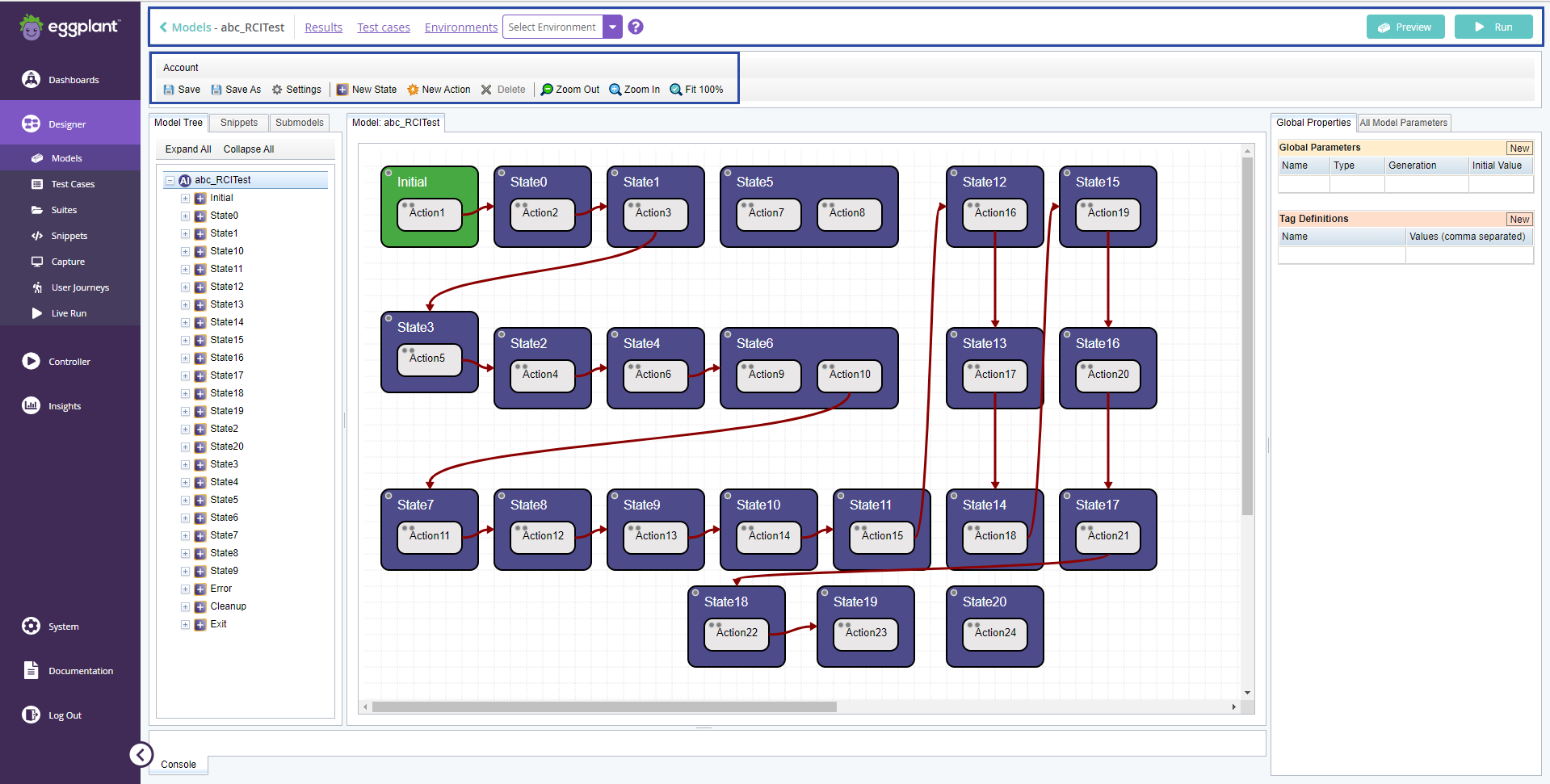 Due to an upgrade of the identity and access management (IAM) system, the refresh token method for API authentication is no longer permitted.

For enterprise users that deploy Eggplant DAI on Kubernetes using Helm, separate DAI databases can now be configured for each tenancy to reduce costs.

Implements an industry-standard identity and access management (IAM) system for the authentication of users and resources, including:

If you notice that your snippet takes longer to execute and you see this error Reached max request limit error in your model console, we recommend you update your current version of product with the appropriate patch fix. Contact Eggplant Customer Support to obtain the patch fix suitable for your version of Eggplant DAI.

This release is applicable to DAI Eggplant Cloud Customers only.

Adds capability to run end-to-end test execution in Eggplant Cloud. You can now run functional tests against a web application using Eggplant software without having to install the Fusion Engine locally or configure desktop machines for browser instances as SUTs.

When running the Run Execution API endpoint, along with entering modelName and group parameters, you also must now enter modelId as a required parameter.

This is the first release of Eggplant DAI.