An Eggplant DAI model is a simple visual representation of the application, interface, or website that you want to test. The model helps you coordinate test activity and includes representations of the aspects of the UI that you're testing. Models don't have to be complete or complex to be useful.

Alternatively, if you prefer running tests via scripts, then you might want to skip this section and follow the script based execution method.

What is a Model?​

Visually, an Eggplant DAI model resembles a flowchart, but functionally, it's more like a road map. User journeys can go in any number of directions to, from, and between the states and actions you define. When you run your model, simulated user journeys are generated on the fly by Eggplant DAI algorithms to do this exploratory testing.

You can also create test cases from the model to cover specific user journeys through the model. 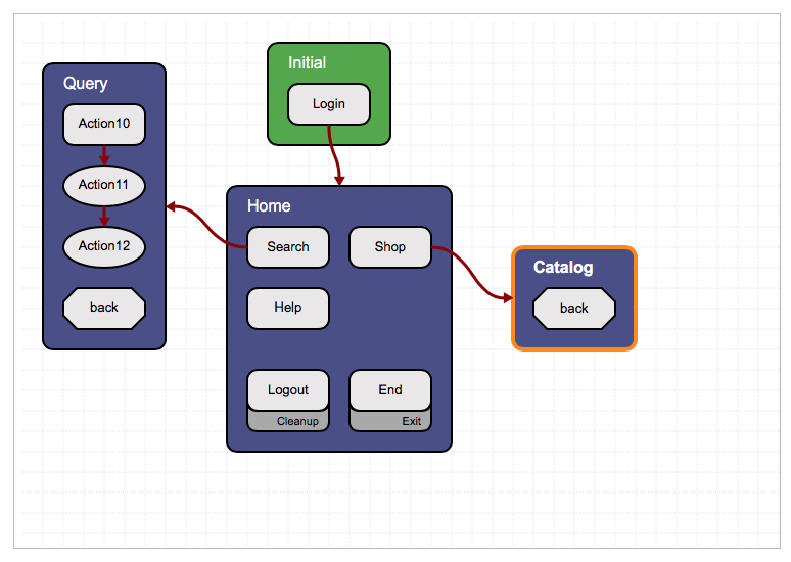 States and Actions in the model represent UI elements and transitions. States are things such as screens in your application, pages on a website, or even dialog box windows. Actions take place within states, and also can move users between states. When you run the model, Eggplant DAI automates possible user journeys through the states and actions you've set up.

Before you build a model in Eggplant DAI, consider the parts of the interface that you want to test, and how those parts are connected. Making a brief outline or sketch of the possible states and actions encountered by users in your interface helps organize your model. You can do this initial planning in the Eggplant DAI workspace.

Each page or screen a user can visit is a state in your Eggplant DAI model. Use actions to represent clicks or taps or other activities a user can perform in the state or that take users between states in the model.

You can save time by using existing models as a starting point. From Designer > Models, just edit the model that you want to reuse and click Save As.

When you're ready, from the top menu, click Run to start testing your model. At this stage, you can just run exploratory tests against your model to make sure that there are no errors. Until you connect SenseTalk snippets to your actions, the model won't be working against your actual system under test (SUT).

See Live Run to learn more about running tests against your model.

Adding Complexity to a Model​

The complexity of the model you build can change as your testing requirements change. You can add representations of user actions like entering passwords and making selections on a page, or add parameters to states or actions. For example, if you're testing a mobile app with a swipe action, you can define the directions in which that swipe can occur using parameters.

You can define the importance of states and actions in a model by adjusting their weights in Eggplant DAI. When you run a test that has weighted elements, the learning algorithms in Eggplant DAI adjust to hit those actions and states more or less often in the test case, according to their weighting.

Adding Snippets to a Model​

You can add snippets to your model if you've integrated Eggplant DAI with the Fusion Engine. Snippets are small pieces of SenseTalk code that you can associate with actions or states in your model. When you run an Eggplant DAI model that has associated Eggplant Studio snippets, the model executes on your system under test (SUT) as it runs in Eggplant DAI.

When you explicitly save a model by clicking Save, you can either:

Click Cancel if you don't want to create a new version. When the model automatically saves, any changes you've made are saved to the active version.

From Designer > Models, you can revert to previous versions of models at any time.

Working with the Model Tree​

The Model tree to the left of the workspace shows your model in tree form. Actions are displayed below their associated states.

You can perform the same actions in the Model Tree that you perform in the workspace. Right-click in the Model tree to open the context menu, from which you can add actions, states, and parameters to your model. You also can delete items, add or remove breakpoints and clear the console from the context menu.